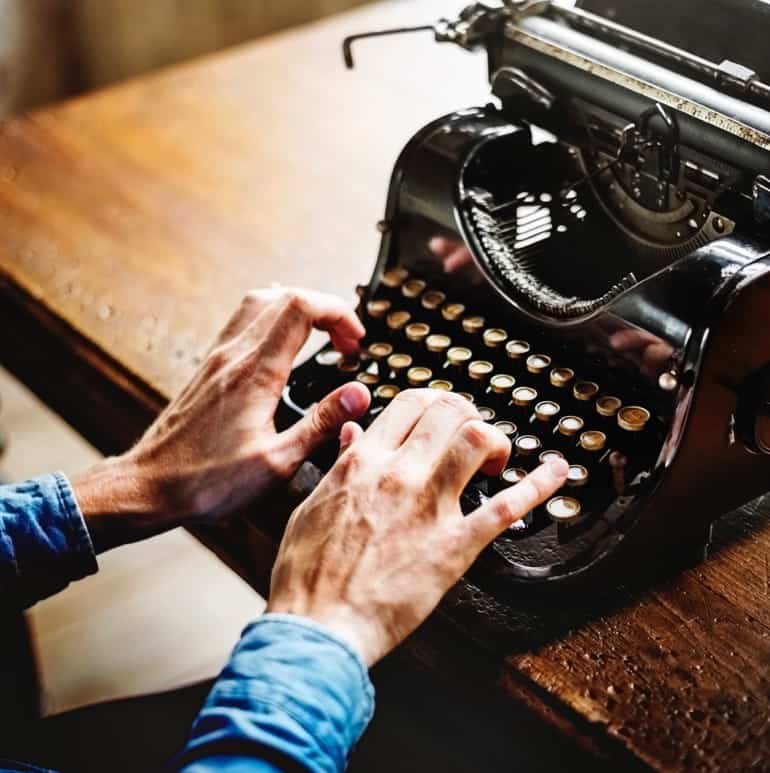 Neil Armstrong was a man who knew about making a habit of taking steps of faith. As the first man on the moon he could only imagine what the lunar surface felt like… until he stepped onto it.

Armstrong did a number of things I think Christians can learn from before taking his “one small step for man, one giant leap for mankind.”

So, let’s assume for a moment that you are someone wanting to form the habit of taking steps of faith with the people you live, work or play alongside in your everyday life.

What can we learn from the world’s most famous astronaut?

Do not wait for a step to choose you

Sometimes you face a moment of truth with regard to living out your convictions as Christians. Someone you’ve known for a while asks for the first time about what you believe. You have to decide how to answer that question without alienating the other person.

Or a colleague at work goes on a rant about religious people during your lunch break. Now you have to ask yourself: How do I know when it’s time to speak up about what I believe?

But forming the habit of taking steps of faith is about being proactive. We do not just state our willingness to trust God if the opportunity arises.

Instead, we ask God what he wants to do next in our relationships with people who do not know or follow Jesus. Then we pray for opportunities to explain how they could know God for themselves. And we think about how we could lay the groundwork for that opportunity before it comes. We think about building trust with the other person step by step.

Neil Armstrong had a mission. He and the rest of the Apollo 11 team thought about each stage of their journey while also preparing themselves for the unexpected. They did not wait for a good patch of moon to appear before deciding where to park.

MissionHub exists to help you think intentionally about the best next step to take with the people in your life. Depending on your context and your experience, that could mean a number of different things.

Perhaps you’re thinking about a new neighbor, so your step of faith is to introduce yourself in the coming week. Or maybe you’re praying for an atheistic family member you’ve had spiritual conversations with before. The next step of faith might be to ask if you can share how you became a Christian.

When you choose a step of faith you want to take, and a timeframe in which to take it, it’s more likely to happen. You give yourself the chance to see God work, on a regular basis, and to celebrate when he does.

Take steps of faith with a handpicked team

Neil Armstrong had Buzz Aldrin — the second man on the moon. He was also accompanied by Michael Collins, the command module pilot history has failed to remember quite as well as his two legendary teammates.

Imagine being Neil Armstrong flying that mission in a solo capsule with no one for backup as he did what nobody had ever done before. Would we have considered that brave, or foolish? And yet for some reason that’s how many of us as Christians approach taking steps of faith — we go it alone.

We think of faith in individual terms too much of the time. You have your personal devotional life, and so you choose your personal steps of faith. You might not even tell anyone else about them, because what would that mean if you did? They might remind you about them.

Jesus sent his disciples out two by two. Yes, the Gospels record the disciples taking individual steps of faith, but the context each time is missional community.

So if we have the opportunity to take steps of faith alongside people who cheer us on, and who help us persevere when we feel like we’re failing, let’s take advantage of that.

If you use MissionHub, you can choose between joining an existing community of like-minded people or creating one with whomever you decide. 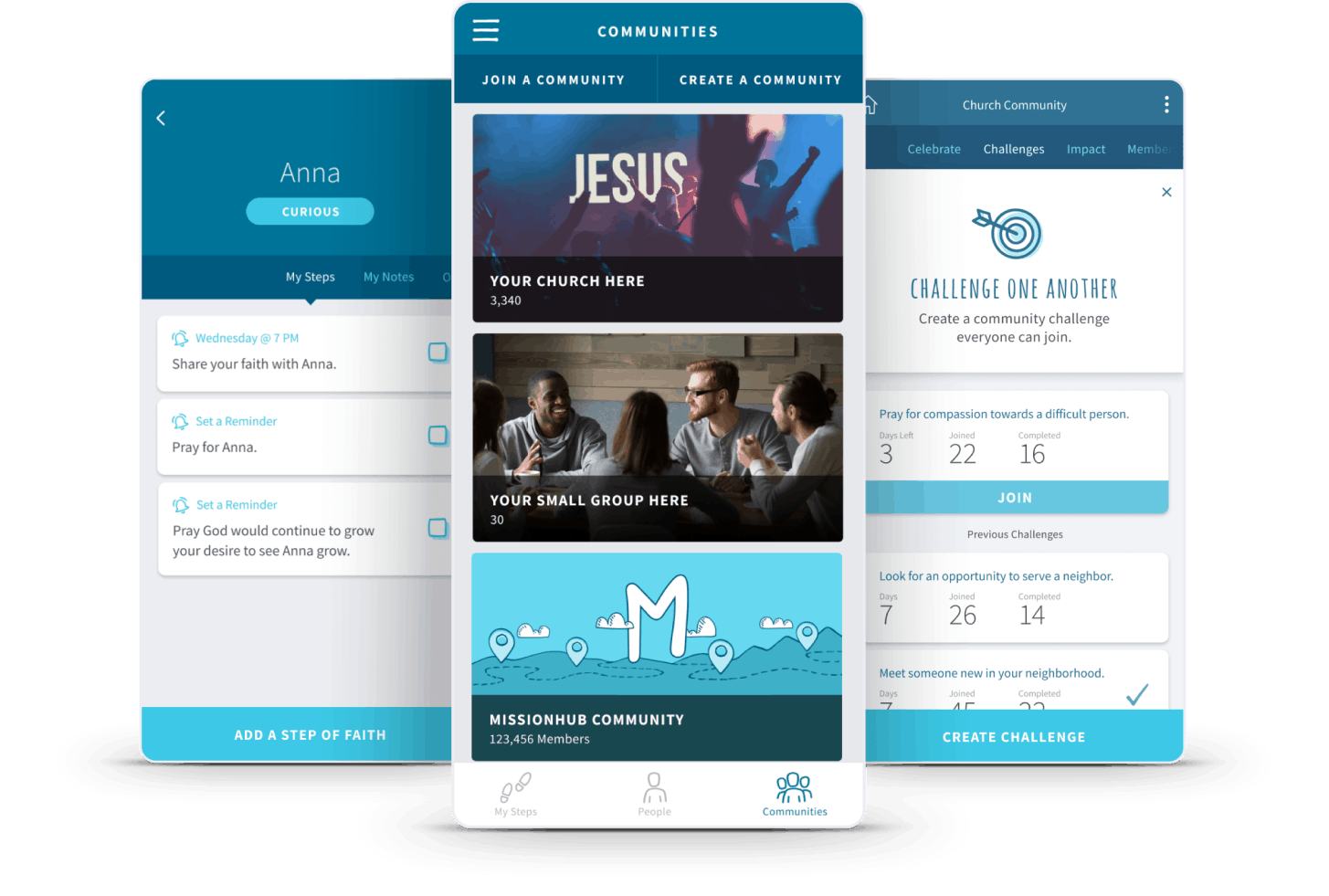 This was never meant to be a solo mission.

You do not have to take the biggest step first

Before he stepped on the moon, Neil Armstrong had to sit on top of a rocket loaded with over half a million gallons of fuel. Before that, he had to choose to join the space program. Prior to taking either of those steps he chose to enlist in the U.S. Navy and serve as a test pilot. And before any of that could happen he took the risk of pursuing a dream that might never have become a reality.

Armstrong took one step of faith, then another, and then another. We can do likewise as we obey God’s calling on our lives. We do not have to start with the scariest thing we can think of, presuming God wants us to bypass anything less intimidating.

Remember, every person matters and every step counts.

So if someone asked you what would feel like a step of faith for you today, what would you say? Is it:

Some steps feel scarier for some of us at different moments in our lives. But they all count.

Jesus asked a fisherman called Peter to cast his net into a lake that had offered up no fish all day. He later asked Peter a hard question in front of his peers — “Who do you say that I am?” At another time he invited Peter to step out of a boat, and walk on water.

All these things happened before he gave Peter responsibility for leading his church.

God has yet to ask me to do any of those things — wise planning on his part. But the steps of faith I have taken have had some kind of logical progression to them, even if I am not always able to see that clearly.

God wants us to grow as we trust him, and we trust him as we take steps of faith with the people we care about. How big or scary the next step may be, is surely of less importance to God than the direction in which we are moving. God is interested in the conversation we’re having with him as we learn to obey him one step at a time.

So what step of faith might God be asking you to take right now? Maybe you can take a moment to pray about the people he has placed in your life and what might move them forward in their spiritual journey.

Whether it feels like one small step, or one giant leap, let’s focus on making ourselves available to God. Then it’s up to him to take us further than you, I, or even Neil Armstrong could ever imagine.

Download MissionHub for help choosing and taking steps of faith.

Keep reading: “When you cannot see what God is doing with your steps of faith”

J.B. Tanwell lives in Europe where he confuses the locals with words he picked up while living in the southern states of the USA. He’s passionate about helping Christians talk honestly about what following Jesus involves.